Wow, it has been sooooo long since I've blogged!  I knew I wouldn't be able to keep up with it once the baby was mobile. Boo.  Since my last post, we had an awesome Halloween (there were 7 costumes between the two boys!), the holidays were amazing, we celebrated J's 3rd birthday at Disneyland, and here we are in 2012! I will update soon with pics from all the big events, including the baby's first birthday!!! We are so blessed that we have two beautiful, healthy sons, and I am grateful every day for both of them.  More posts soon- hopefully!!
Posted by Mommy McD at 8:51 PM No comments:

I am in love with this couple! So freaking cute!!

I know, it's been a while since I have posted.  Two littles under age 3 can keep you kinda busy!! My baby is 9 months old today! To celebrate, we are going shoe shopping!!! I have two boys, so I miss out on all the tights and hair bows and pink, but I can still shop for clothes and shoes!! My hubby says I am a baby clothes hoarder- but he doesn't know the half of it... I hate to admit it, but both boys could probably go a week (or 3) and wear a different pair of shoes each day! I need to stop! In my defense, shoes are so fun to begin with, but on top of that they are tiny???  How's a girl to resist??

One of my very favorite brands is pediped.  They are cute, comfy for the littles, and according to our pediatrician, the best for the littlest walkers.  Here are some cute ones: 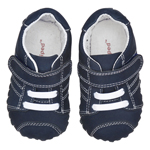 The other great thing about pediped is there "flex" system for toddlers that are beyond the baby (soft-soled) stage.  It allows your kiddo to wear their shoes longer because they come with two sets of insoles.  As their foot grows, you remove one of the pairs, and the shoe fits longer! Genius!! These are one of our older son's favorite pairs, which he was able to wear for 7 months or so thanks to the "flex" idea. 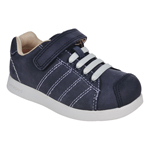 I recently learned of another brand of shoes to love! See Kai Run shoes are comfy, cute and easy for little ones to put on themselves! Score!! Look how adorable- matching for baby and toddler!!

And finally, here is a great website where you can get both of these brands, plus tons of others, and they often have pretty good sales.  I used the code FALL11 today and got 15% off my entire purchase (including sale items), plus free shipping!  I love websites that have free shipping!! Hello, websites that want mamas to shop there?? I am MUCH more willing to give you my hard-earned money if you give me a deal and/or make my life easier.  I love me some online shopping while the boys are napping, and if I am getting even somewhat of a discount (and can avoid dragging them to the mall), I will probably double my order. (Sorry, hubby.)


Here's one last pair of adorable shoes- who has a girl I can get these for? Soooo pretty!! 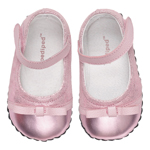 Anyone else have any online discount codes to share??
Posted by Mommy McD at 4:23 PM No comments:

I have a dilemma. I don't know what to do about Sea World. I LOVED it as a kid. However, after watching the very shocking and disturbing "Blood Dolphin" on tv, my hubby and I were very upset at the idea that almost all marine life in captivity were captured in inhumane ways.  I am torn because I feel like seeing these amazing animals in person makes children love them and want to learn more about them and protect them .  Plus, I want to share in that excitement of when my little ones see that breath-taking Shamu for the first time!

Our older son loves animals, and I know that a trip to San Diego would be so fun for all of us.  Should we just stick to the Zoo for now?  Help!!

I have a fear of shopping carts. Not really, but they are so gross.  I have seen kids fall out of them (seriously! It's horrifying.), barf on them, lick them, wipe their boogers on them, etc. This is all in addition to the nasty germs that we grown-ups spread on them just by using the handles. Yuck.

I am by no means a germaphobe, but once I became a mama, I gained a whole new appreciation for nasty, germ-infested things (like the pediatrician's waiting room- you take them in for one thing, and they catch all the other bugs going around, fun!).  I stocked up on hand sanitizer, wiped down everything I could that would go into the baby's mouth, and made sure that we all washed our hands often.

Guess what?  Both little ones have still gotten sick. It is unavoidable. But I like to think that they have gotten sick less than they would have if I wasn't so crazy.

Now that our first son isn't a baby anymore (tears), I have to get used to the idea of him getting dirty sometimes. It just goes with the territory of being two and a half. He is also around other kids a lot more, so he is exposed to many more germs. I have accepted this (I guess). But the one thing that I am still not ok with is him sitting in one of those nasty shopping carts unless I wipe it down and put a cover on it.  Some of my friends think I'm nuts and that he is too old for this, but I don't care. As long as he will let me, I am sticking to my guns and covering up that dreaded seat. Luckily for us both, they have such cute shopping cart covers now, that even big boys will probably agree to sitting in one.  Here is the one we have, which covers up high chairs (also germ infested!) as well: 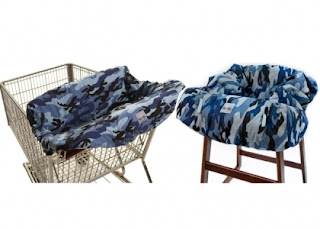 This cover is by itzyritzy, and they make such cute stuff!!  I love their carseat covers, wet happened bags and nursing covers too.

One last thing about shopping carts: up until a few months ago, I thought that balancing an infant seat on top of a cart was the safe way to shop with a small baby.  Then I learned that this is risky, and that baby can easily topple off.  So scary. Now I shop with the baby in his car seat in the big part of the cart, or in a baby sling, and our big boy in the covered seat in the front.  It doesn't leave much room for groceries or goodies at Target, but that keeps me from spending too much, so that's a good thing! ;)

Ok, rant over.  Happy shopping everyone!
Posted by Mommy McD at 6:59 PM 4 comments:

The baby is going to be 6 months old in 2 days. How did THAT happen?  I swear I just had him a few weeks ago!!!

Anyway, with the 1/2 a year mark comes solid food time.  Up until this point, he has been exclusively on boobie milk, so I am excited to see what he thinks of cereal, fruit and veggies.  And I'm looking into purchasing a Babycook so I can make our own organic babyfood.  Any pros or cons about this product?  It's pricey, so I want to make sure it is worth it before I splurge.  With our older son, I made some of his food, but the old-fashioned way, and it took forever.  I love the idea of one appliance that will steam, puree, etc.  Please tell me that you love this product and that I should buy it!!!! 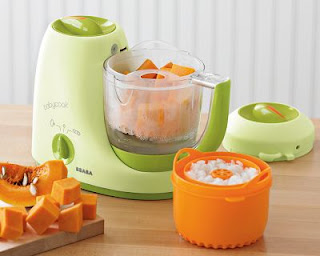 To Swaddle or Not to Swaddle, That is the Question.....

Well of course the answer is YES in our house. Our babies (and most babies I have heard) LOVE to be swaddled. It makes them feel safe, and keeps the startle reflex from waking them up. Dr. Karp's Happiest Baby on the Block (a Godsend and must read for any new parent, imho) highly recommends swaddling to help baby sleep. Since our first son was a sleeping champ from day one, we planned on doing all the same things that had worked with him, including swaddling, with Baby #2.

He is a pretty good sleeper also, although not quite as unbelievable as his big brother. I can't complain though, because he is still much better than the average 5 month old.  I guess we were just so spoiled the first time around that we think he doesn't sleep for long enough stretches at night. When I asked our pediatrician why he was still getting up once (or twice) a night to eat, he basically laughed at me and replied, "Because he's hungry!" He also told me that most babies his age only sleep about 6-7 hour stretches, and that is considered "sleeping through the night". This was news to me, as our older son slept 12 hours straight (and napped for two hours TWICE during the day) at this age. No wonder the other mommies at Gymboree hated me when I would tell them that...

Anyway, I am getting way off topic. I am supposed to be talking about swaddling. We LOVE swaddling. I am a big fan of several swaddling blankets, but baby #2 was/is quite the Houdini and was able to get out of many of them. Then I found the Miracle Blanket, which I love. However, now that my monkey is bigger, he can get out of that one too. Such a bummer, because I was sure it was unescapable. The thing is, though, that the miracle blanket's website, and many other mommies, recommend discontinuing swaddling at about 4 months. So once he could get out of it, and he was almost 5 months old, I figured it was time, even though we had swaddled baby #1 until he was 6.5 months. Well, baby #2 was PISSED. He would not sleep and clearly was waking himself up when he was not swaddled. I was able to find two swaddling options that are for longer babies (you can find them here and here), and they really are IMPOSSIBLE to get out of. My question is, is it dangerous to keep swaddling him at this point? He will be 6 months old on July 7. He can roll over very well, but he never does when he is swaddled. I am afraid of him getting stuck if he rolls when swaddled, but then again, he needs to sleep (and so do we) so I think he needs it for a little while longer. The doctor says it is ok, as long as we are diligent about checking on him to make sure he doesn't get stuck face down. Hmmm- that doesn't give me the best feeling.

Anyone else swaddle their baby past the 5 month mark?? He has to be able to fall asleep eventually without being in a "baby burrito", so should I force the issue now? With our older son it was so easy.  One day, all the swaddlers were dirty, so he went to sleep without one and he never looked back. Our new little man seems like he is not going to give this up without a fight! Help!
Posted by Mommy McD at 9:08 PM No comments: